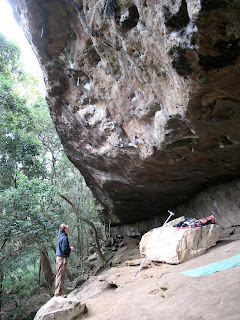 Ahh old friends. I'd had not been to Nowra for about 2 years and before that not for about 3. So neglected is it by me despite intending every year to go down to that mud choked irrigation ditch and do EVERYTHING! Oh and when we met once again, it was like an innocent boy meeting the prostitute who made him a man once again. I can't see any sense in comparing Nowra to a beautiful woman. I touched the rock, it touched me, we were together again. So The Bop and I waltzed down to have a tinker at Planet Cock, classic sustained boulder routes here typical of Nowra. The icy weather in the mountains made us sure that Nowra too must be experiencing a second ice age, and sure it was pretty chipper but like any highway truck-stop bunk bed, despite how cold it might get theres always something unexplainably smeggy and dank about it. We spent the day tussling with White Ladder, the extension to Attack Mode, falling off the gaston move at the top. Once we were spent like roman coins in the ocean dusts of the aegean we were made to cut lap upon lap upon lap on each section for a buddy playing with his new camera. Despite getting absolutely and beyond any word for trashed and smoked doing laps on sections of the route, the moves and sections were still coming together, as we became more and more smoked, the moves were become more and more dialled. Being fresh at the start we were able to over power the moves and maybe over look the subtlety the route may require, but now, cooked and flaming and in need of busting lap'pon lap we couldn't hide from the need to find the subtleties within the moves and even though now we must go and swab our sores and drink from the vine and recover, we have built an army of engrams that cannot be destroyed, fortified on the blood of first hand battle and temporary defeat to return and deal the last smiling blow, maybe. 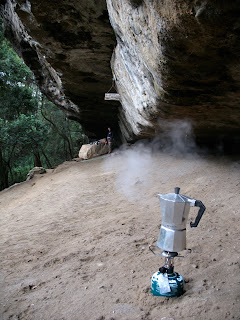