'neath the canopy of the Ukelore 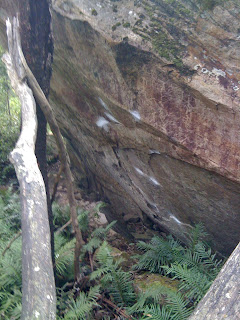 For the last little while I've been meaning to venture over into another hidden offshoot of the never ending sprawling mass of the Megalong. Through the hanging green rainforest's again I go for what seems like the first human steps taken through the thick thick evil jungle that seems only intent in this life to hold me up on my way to find, whatever it is I'm looking for. I walk on through all the greenery of pre-history in the search for new boulders that, as I've suggested in previous captains logs, must exist here, 'mongst the leafs and bowing branches of this Black Morton Hills-esque landscape. I can get carried away when I'm venturing into the unknown, alone with a head full of freedom, fresh air and lunch time coffee and start inner dialogues that continue into ever increasing fantasy until I'm scrounging through the undergrowth paranoid that old Toad Morton is gonna capture me and chow down on my face whist squatting in my slitted stomach, all and completely unbeknown to the world writhing like worms above this dark, wet valley never to've known of my brave wanderings. I venture forth, fairly sure within myself that the Megalong Valley isn't a moonshine bubbling Deliverance like back water with Toad Mortons spying from behind every tree and low lying moss covered stone, waiting to pounce and secure this weeks flesh once I turn my back. I say fairly sure because on the odd occasion throughout my rambling I'll stumble across either some strange makeshift shelters made from weaved ferns and sticks or even arrows stuck into trees, actual bow and arrow arrows or sometimes even spooky little totem like carvings in the crevasses of tree's. One particular carving in the side of an enormous tree depicted what looked like a lonesome traveller surrounded by a group of people dressed in wolf skin and brandishing pitch folk kind of things. All scary enough for a lad wandering on dusk through thick, thick undergrowth getting tangled constantly in vines and slipping on damp fallen trunks, whose scared of sharks in swimming pools let alone voodoo shelters and evil omen statues scattered through what is a fairly inaccessible area in that there isn't any walking tracks, sites to be seen nor really any reason for anyone to be anywhere out of ones carriage on the old bumpy, mud chocked road that runs like an unhealthy vein down the length of the valley. So yes, my paranoia about gett'in ate up and shat inside of is completely justifiable considering the grim happenings of this world and though it will not stop me from my search for new boulders in the seemingly evil unknown hollows of this world it does play on my mind, still though, I shall go forth!!! 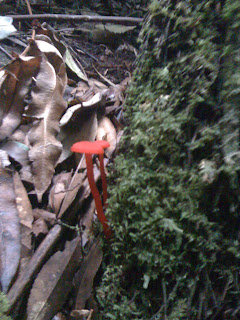 So today was a freezing day that mustn't have peaked above 5 degrees, so 'neath the canopy of this Ukelore it felt about -1 at best unless one doesn't fall into the creek that rattles through the middle. I must have walked for 10 hours through the jungle that I've already described to you as treacherous and unforgiving all in the hope of finding the spoke of but never found, hanging fin boulder that sits almost completely submerged in greenery except for the upper most tip that juts upward to what was an ever darkening firmament. And I walked, let me tell you I walked long and disorientated through the tree's to find it. It is visible from on top of the plateau that looks over the Ukelore, but only just. I've been meaning to go in search of it for a long time and did actually attempt to find it the week preceding this but only found myself in a snare of natures hand, my leg down a hole bleeding and bone flexing in the mid crural region almost I think breaking but luckily not, for I was a wee way away from anywhere, with no one knowing where I was. This day however was different. After searching for quite a long time and after actually finding some pretty cool boulders that are totally worthy of cleaning up and doing I found myself at the hanging fin boulder almost accidentally as the jungle was so thick and the boulder so well camouflaged 'mongst the undergrowth that I didn't see it until I was right on top of it. 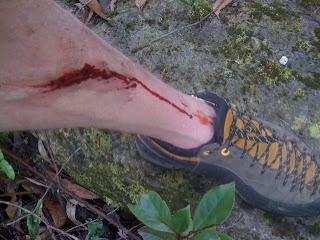 Great adventures of discovery have lifted great stones only to find a few worms and a half disintegrated piece of toilet paper beneath. But what is an adventure without the uncertainty? 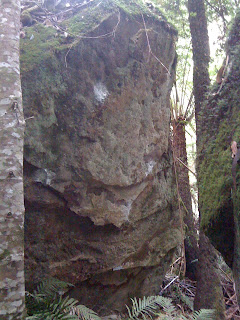 Either way, I lay my eyes on the steep face of the most compact rock I've seen on a boulder in the mountains. I couldn't believe it at first, I was assuming for some reason it would be gash as you see. But no! I looked upon its almost granite like features not really sure if this boulder made sense, the rock was perfection, on a steep wall, with more than a few lines running up it. It was IT, what I had been knowing that I must find at some point, I'd seen hints to the brilliance scattered across this demonic valley for weeks and here is the mother of it all. Here it had existed all this time, unknown to all but the cannibals of the Ukelore and the mites of the earth, like Atlantis would have, had it. 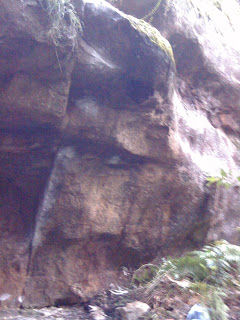 Darkness had, by the time I collected myself, settled wholly and completely on every surface of the valley and I had been oblivious to it all. To find the fin had taken all my bravery and know-how and now I must navigate myself back to the old road and hopefully acquire a lift back to Blackheath, all in the pitch black night. It had dropped in temperature and must really have been about -1 now or something close to as it had started snowing! I struggled back through the undergrowth to the small muddy strip that winds its way back to civilization. After a few unsuccessful attempts to thumb a ride back on outta there a coach drawn by four dapplegreys stopped right there in front of my feet, the gentleman at the reins gesturing me to climb on in. I did. I introduced myself to the lady and gentleman within as Jolly Buckshot and told 'em of my toil with the strangeness neath the canopy, we rode on. The young miss asked what in God's name was I doing in there, let alone past dark and didn't I know of the evil that resides within that grim place. I told them I was no stranger to strangeness in all it's forms and that yes, yes I was fearful of what I may find or what may find me in that nameless place, but that the wire so firmly wrapped 'bout my heart did tug at me so ferociously that to not adhere to its calling would be death, death of at least my spirit and to not adhere now knowing what I know, of what is to be found neath those cold bowing branches would be an even greater evil than what supposedly dwells within there. "No Mame, I am not that man who shall wither without first having bloomed, and if that means sending myself into that toothed mouth then I shall." At this she wished me all God's strength in my roaming and that He would protect me in that devilish realm, to which I said "He does not lye without of that burdensome place but within, and the HE you speak of miss is infact only an IT, for I've laid my eyes 'pon it and IT is not but what I as flesh-man doth seeketh, that which does cause my chest to rise and fall, that which does flood thy veins, that which keeps my heart 'a pump-pumping. I was drawn to what I was not certain, and that which I could not sleep without knowing". 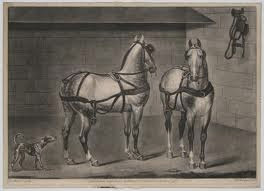 So yes, there is good stuff to be found in some not always typical places, but it is there, not waiting for anyone.
Posted by Ben Cossey at 4:54 AM