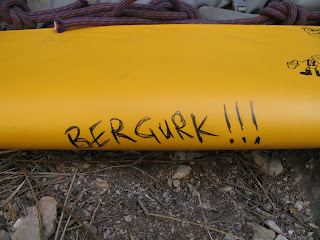 Well just before heading off to the Grampians for two weeks Lee and I rolled on back down to Bungonia to jump back on Bergurk, our super, mega, uber classic limestone project on the Chicken Wall. As you'll read in the previous post it is the single greatest thing in the world. Steep limestone stretching almost 150 metres split into three pitches. Our goal for this day was to explore the upper extremities of the route. We knew the bottom two pitches went, but it was the very top pitch that still held all the routes mysteries. 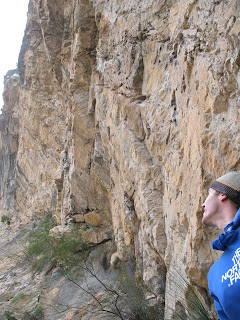 As we do with Bungonia, we drove down the day before and slept the night in the private cabin they have down there for us. Heated bedrooms, BBQ's, a thoroughly modern kitchen with self-cleaning oven, the whole bit. It was freezing though, 1 degree, and the heater didn't work, neither did the stove and we only had bacon and eggs for breakfast. What to do but to chuck a Rocky on the egg's and bacon and throw it all back raw and wriggling. After all, it was gonna be a long day and we were gonna need our energy.

Back down at ground zero, the base of the route, it still seemed steep, long, and altogether dominating of our minds. A formicating fear started encroaching upon our otherwise sturdy demeanours, but we were there, and yes we may have been feeling a gulping worry crawl in but there was nothing for it but to suck it up and tuck it away into our back pocket and get on with what we came here for. 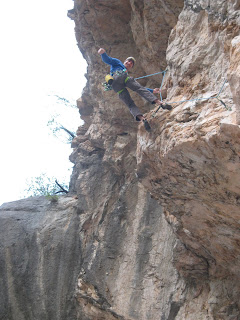 The first pitch wizzed by as any super classic, 60metre 27's do in the middle of winter for a warm-up...Fun but with a hidious cold pump that kind of lingered for the rest of the day. Next up was the big middle pitch. All the moves went as they had done on the last trip but upon taking step back and thinking about it, it seems really more like 33 rather than the previously thought 32. Which is pretty cool, a 3 pitch 33. 27,33,31. 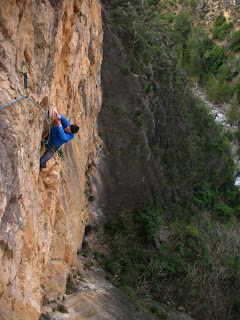 The top pitch was the unknown for the day and after we had both had a good hour and a half work session on the second pitch we were feeling a little tuckered and it was one of those days when you never actually warm up, every time we pulled on it seemed as though we we stone cold. It was howling with wind and it was about 5 degrees tops. It was the day when all the pine trees in Blackheath tried to escape from their dirty ground shackles but only managed to get as far as the neighbours garage or the 4.28pm train from Katoomba... So twas quite windy and brisk. So yes, we had a good work session on the middle hard pitch and then got stuck into the top pitch. We realised when we got to the top pitch that we hadn't actually had a chance to clean the begger so instead of us both getting a chance to tussle with this whale only Lee got to. He brush and he scrabbled all the way to the top of this 35 metre pitch which overhangs maybe 12 metres.

It's funny when you're sitting in your harness bolting away, you are much braver than when you are on the sharp end climbing between the bolts you've paced. On the top pitch, just off the belay, was a hidden crux we hadn't noticed when bolting and now Lee had to climb on through a hard and not quite yet cleaned section, threatening to land on me and sever the rope on a serrated edge just off the belay. Once through we both concurred the others opinion of placing one more bolt on our next visit so as to safe guard against death and high wall stranded injury. 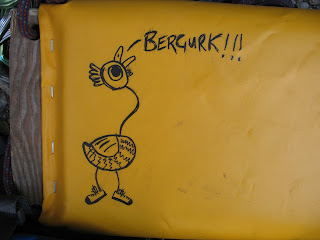 Lee had a bit of a struggle sorting the sequence of the very top of the top pitch. It seemed like the wolf was waiting at our doorstep if you know what I'm saying. Waiting at the door step rather than somewhere midst the woods on the road home or by the tulips at the front gate. What I'm attempting to convey is that there, just below the anchors waited potential disaster. This wolf seemed more ferocious than it twas however. Once sorted, the sequence through the top roof resembled an insane 360 degree woody problem. The moves to the anchors are a series of pounces with big, sweeping cut looses on slopes on the very, very top of the cliff. Absolutely crazy!

After Lee finished on the top moves we had to hurry to get on outta there before it got dark. We wrapped off from the top of the second pitch and then rapped quickly down the slabs below and strolled out in the dark with full winter woolies on, such was the state of the chilly weather. 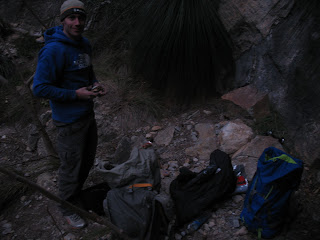 And now we go off to the Grampians to leave Bungonia, via Hungry Jacks for a couple of weeks of bouldering in the forecast wetness of the south.
Posted by Ben Cossey at 4:59 PM