The poor souls left to wither in the Blue Mountains and to watch the world roll by from their window-box's and dream of dry lands far away where the canola fields catch the early rays of a new sun are once again reminded of the poor hand dealt unto them in life's road with news from yesterday of Lee James Cossey's successful ascent of his project on Taipan Wall in the Grampians. But those who feel hard done by can still draw inspiration from this, what must be one of the greatest lines in the world. The line was bolted by him about ten years ago and stretches the length of the wall in one rope stretching 55m pitch of orgasmic, orange, joy-weeping solid gold bubblegum sandstone. It starts up Naja but quickly jots off to the right via a radicle smeary undercling flake, it then starts on its sneaky upward journey via shallow con-caved scolloped scoop feature as slick and unforgiving as a bodum glass with monos and two finger dishes calling for all cards to be played then and there before the matchbox crimp crux. There the gatekeeper stares down upon the aspirants fatiguing forearms and chuckles. This has been the storey of Lee's past three trips to send this rig packing, the gatekeeper kept on dealing out ace's and Lee kept on 'a sailing back down from whence he came, the air mid fall becoming a constant companion. Yesterday Lee woke with a split tip, right where he didn't need it, the crux matchbox had been taking it's toll. The first shot of the day he climbed up and up and started noticing a trail of blood on every second hold, he noticed that his tip was punctured good and proper and blood was spurting out like a jabbed femoral thingo at the nuzzle of a boar. Still though he got a high point despite the hemorrhaging digit. The next burn he wasn't holding many hopes for the ascent but as we know of The Bop Canary already, whenever theres half a chance of sending something then that something don't stand half a chance. Bleeding through his mummified finger he reached the point of so many failures, boned the fuck down and sent the fucker. Nice. He called his route Sneaky Snake and graded it 33 and is very likely to be the hardest route in Victoria and must put him in contention for another Golden Carrot award for 2011...maybe even 2012 ;). The name is in reference to a song our pappy used to play on the old record player when we were wee chicks in the nest (I have put a link to it too) and fits in with the snakey snake theme of the wall and the instinctual sneakiness of the man himself. Hmmm, I think thats about it...

Oh no, Doug McConnall, while not having redpointed it as yet, has been working the Groove Train, which sits proudly to the right of Sneaky Snake. He climbed it in two big overlapping sections and is on for the ascent, although today is their last day....

...that was my beta for a successful ascent, lets hope it works! 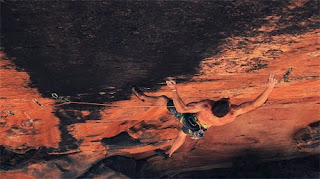 Thanks to http://www.phillipsage.ws/
Posted by Ben Cossey at 8:24 PM