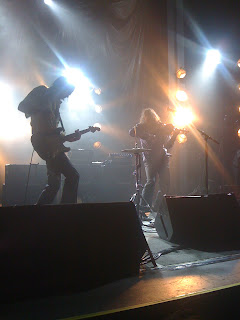 Not so long ago I ventured down from the country to the city to see a gig that I'd got tickets for for me birthday. The gig was to see GRINDERMAN, which is Nick Cave and a couple of the Bad Seeds but a whole lot dirtier and noisier. I've not seen a tonne of live shows but this was so god damn good I had to debrief about it to myself, here for some reason. Better than the Pixies, and thats saying something. We were in the front and two times Nick leant over and put his hand on my shoulder and screamed and spat in my face (I haven't washed my face since), sticking the mic in my face so as to repeat the tippy-toe tippy-toe bit of kitchenette, me singing with him! Shit me it was ace and I had this ace picture of Nick and Warren at a loose end so I thought I'd chuff on about it to no one for the sake of venting my own excitement of the occasion this morning in silence in front of this screen. I got a pick too.

Otherwise happenings up here have been slowish other than the exploits of the visiting Lawry Demody who's been busting out a few things including the 5th ascent of Grey Area (33) and Mr. Tickle (32) at Diamond Falls. Lee's down at Taipan at the moment trying to put to rest his project to the left of the Groove Train. He's psyched to send it packing so'z he can do the Groove Train too so he never has to take a rope to the Grampians again and can have some good bouldering time. There has also been a bit of bouldering exploration happening, mostly in the Megalong Valley. The common opinion that the Mountains doesn't have any good bouldering is totally wrong as we know but, there is reason to believe that this misconception may just be even more wrong than we first thought. Unless I'm on drugs or high on the fresh air, leading to the fancying of myself as a bit of a John Muir nature bunny and my looking upon every bit of almost rock as another bread crumb on the trail to the inevitable brilliance of the must-be-found boulder mecca just over the next ridge, thus listening to the mountains speak and in tern being a wise man for said act of listening (Muir, 1873). This subject will be covered in greater detail in the next lecture, but if I forget to do so, go out looking for yourself, it's out there......waiting, as only it knows how.