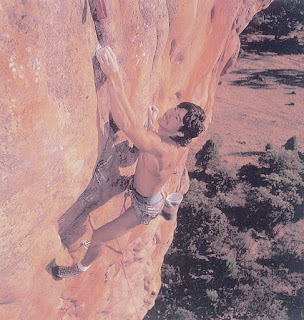 Well it's that time of year again when the leaf's are all falling off and around and we are reminded that our summer of hunkering down from the heat and sheltering from malady bound thoughts with distraction in training and home brew, short shorts and football was not in vein and that we would, as we always do, be drawn to the light of another glorious autumn-come-winter where the sun won't bite us so evil and the rock don't spick us so evil and all is well in countenance's and motives that swing from such rusted hinges in the warmer months, oiled once more in seeing that it ain't all shit. 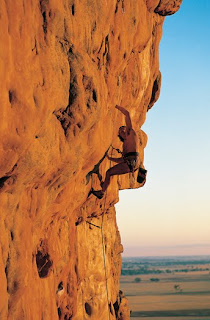 So what time of year then? Well it's that time when the world stood up and turned it's eye to Arapiles, Mr. Wolfgang Gullich and Punks in the Gym! The first 32 in the world and still the best. The old silo's are still there watching would-be ascensionists as they touch up the hallowed stone above the pine below that has been growing all this time becoming ever wise despite attempts from self-rightous assailants to hack at it's knowing limb's and send it into undeserved rot and wanting with what it had waning as the dust beneath it becomes less it's, true it stands.

So if you're passing by it today or thinking about it just remember, it's really ace and its been 26 years since it was done, ever an inspiration as Wolfy too is always. Rad.
Posted by Ben Cossey at 10:23 PM