Far too little has been happening on the western front that silence was a must to convey the extent to which slowness and nothingness consumed all. Study for the mid-semster pile up of school work though, has now, thankfully taken less of a staring role in the day to day life of your trusty explorer and now, as the functional anatomy star he is, he goes forth!

Exploring in the depths of the Ukelore Valley has turned more amazing stones then could ever have been imagined. It is still an area characterised by space between problems but that space only serves to increase the trepidation one feels as he walks to the next problem, having been told of its majestic qualities and been struck dumb by the previous problem shown unto him, to round the corner of such a hunk of prehistoric stone to be greeted with something so awe-inspiring it literally takes the breath away, jaw dropped and mystified that such beauty resides in such toildom. 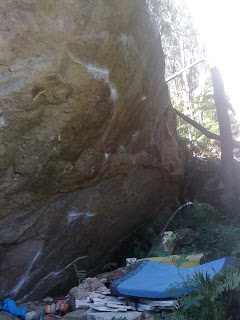 I spent a glorious day tussling with the boulder above which is tentatively called Cosy Mo... or Euchrid Eucrow. I'm not sure, maybe both or none. Either way it is the single best thing ever in the world. About 13 moves straight up on some of the best holds I've seen - slopey slopes and edgey edges, big 1-7 moves, just like the ones in your dreams but without the disappointment experienced upon waking...by that I mean they are real and fully in existence in complete glory and majesty - Beautiful.

A week or two earlier I climbed the road side classic "The Pink Caravan On The Hill" at tricky V8 or steady V9 (picture at the top). It is a rad problem the starts by lay backing an open book and finishes with bicycling feet and slope slapping hands on amazing rock. Certainly one of the better problems of my life. Another cool diddy I found was on the notorious (and haunted by the way) hanging fin boulder. A couple of metamorphisized shale rails, some slaps between them and there yo have it, "The Mauling Of The Ass"-V7, also a 3*** classic if ever there was one. I accidentally referred to this one as a V1 to an unsuspecting and study-wearied Lee who...found it a bit spicy for a problem he thought was going to be V1. I didn't realise I had said it was V1!!!

So for now I'm to take leave in the southern state for a much needed break, not only to rest the mind but to see how I go once again on the aforementioned (in previous post) boulder that tackles the guts of the Hollow Mountain Cave - The Wheel Of Life.

I'm trying to play catch up with the blog...more to come
Posted by Ben Cossey at 4:26 PM