When mid-semester break rolled round I was in a pickle. I wasn't sure whether I should hang round the mountains for the week in a decrepit hangover from study OR take to the open road on my lonesome and drive my rattling and smoking car all the way down to The Grampians to see how I faired once more on the Wheel Of Life. I chose the latter. After one more day at work at BJR's in sunny Blackheath I packed my car chocoblock and kicked that piggy alls the way to west hollywood...west hollywood being Mt. Stapylton Campground. 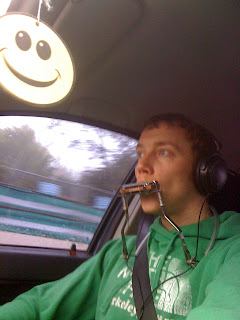 My car doesn't have a stereo so my journey was a quiet one. Quiet in all respects except for the rattling going on under my right front wheel arch and my paranoid thoughts running around my head as I sped across the flat land as the sun went down across the plains. In the last rays of a tired day I stopped for a breath of fresh air and who should pop its head out from under the wheel arch but a plume of thick smoke smelling like burning. I thought some desperate thoughts for a little while, then, just like that, a light bulb appeared above my head. The smoke weren't doing no pluming as I sped across the wide open land, the air in my hair and the white lines shooting unnerneath me, sun cutting long shadows as I pierce through them like they are only the gaps in the sunlight. Zoom, zoom, zoom. So what better to do then saddle on up once again and aim that blue rocket straight towards the horizon...the ominous smoke won't catch me out there! So on I drove, and no, the smoke didn't follow.

So yes, got down there without anymore hiccups as far as the car was concerned. The drive is a bit brutal when performed solo and when I got to camp I had to put a tent up I'd never put up before. The brutal drive really showed what a long lonesome drive does to a man. An hour and a half in the dark later and it was bed time... 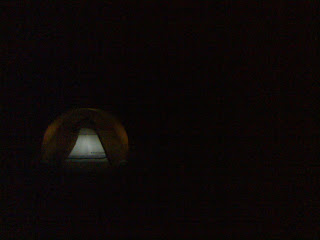 First day after the drive is never amazing as far as climbing prowess goes but I was on a tight schedule. Mid-semester break is only a week long and two of those day had to be spent driving and at least two of those were going to have to be spent rummaging through textbooks so I had to make the most of the time I had. So the first day I had a cruisy, coffee drowned morning, as any other, and lugged my three pads on up to Hollow Mountain Cave. I spent that afternoon doing all the sections of The Wheel individually, ironing out the intricacies before coming back the next day and giving it a good and proper burn. Funny thing though...on thinking I might have a go at Xtreme Cool to see how it felt I managed to climb almost to the top of the whole cave, falling on the last hard move of Dead Can't Dance. Rad, next shot for sure I thought. But no, it wasn't to be, The Angel Of Don't Get Too Big For Your Boots yoinked me off at the end of Sleepy Hollow on another burn from the ground. I called it quits for the day as darkness had descended on the place and I couldn't see me britches for me hind quarters, plus I was weary, and only to be more so, from the drive and a good day of chunking about on blocks...back to camp it was for the first of a series of incredibly poor attempts at gourmet asian camp cuisine. 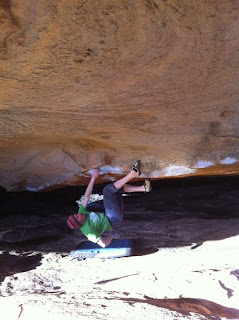 The second day I weren't much chop, I fell from the lip another couple of times and then retired cooked as a pancake and twice as flat. I was still hungover from the drive down I think and that plus the two big days trying the Wheel wasted me good and proper. I also opened up a gash on the back of my index finger that I got from last trip. It had healed all nice, pink and pretty until I got too greedy grabbing the undercling on Cave Man and tore it open again, and like last time too it got all funky with the camp dirt and started getting all swollen, showing signs of secreting the same infected gyze puss as last trip...

After a rest day I'z all fresh and rested and ready for another shot but the rain came and washed all hopes away. The whole cave was so soaked, water on the holds and drips from the ceiling and nothing to do but rest up and go and sit in my soaked tent and do school work... 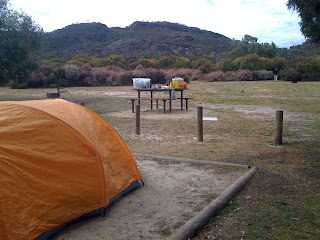 The next day dawned and it seemed as though the forced second rest day had awakened me, renewed and fresher than I could have ever hoped to have been after only one rest day. The sun was shining and the air was dripping with the smell of the wild flowers, "shit me" I thought to myself as I stretch me lonesome bones in the warmth of the morning sun "if this ain't the prettiest day I ever witnessed I don't know what is". I lost myself for a time in my ritual coffee bubbling and found myself contemplating how my life would have turned out if'n I'z born into a wallabies pouch - small of hand and hoppy in hind was my conclusion. The day was so gorgeous that it soon roused me from my revery and slapped me bout me chops, prompting me to pack my tricks and steer my little piggy towards Hollow Mountain Cave once more... 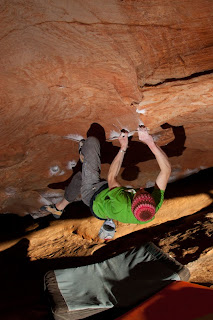 It was perfect conditions, breezy and cold. I warmed up on all the separate bits that make up The Wheel. I was just about to pull on part way through Xtreme Cool to finish my warm up off and I thought "fuck it, I'll just give it a burn now", sort of like on the first day. I pulled on, thought of all those unlucky wailing souls stuck inside wallaby forms across the land, to end their days arse heavy as they are, and me, lucky as any gambolling mountain chamois a'nibblin his grass and dreaming of salt-lick, I climbed on. 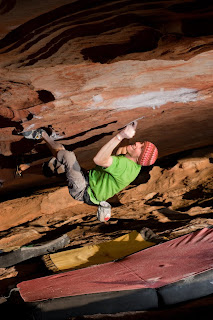 I had been getting all manner of redpoint worries on the preceding days because of the time constraints I was under, what with the uni work I was meant to get done whilst away plus the fact that I was already well past sunset as far as my ration of time was concerned for this stolen holiday. I was under the pump and infectious thoughts kept seeping in ta me nog. I was at the rest at the end of Xtreme Cool when I thought to myself that all I need to do is climb the thing like I know how and to be victim no more to the woes that plague a holidaying climber with redpoint blues, I pulled into the start of Sleepy Hollow with the plan to consume my thoughts with breathing. Breathing out with my hands and in with my feet and just letting my body do what it knows it can. It worked on Truckstop, why won't it here...? 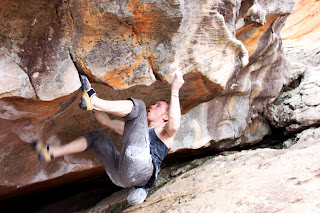 (the move coming into the bread loaf, there's blood in my arm pit!).

I pulled through the crux, dropped into the bread loaf at the end of Rave Heart screaming just like I had imagined I would have on this move on link, hucked up to the jug over the lip (sticking this move on link felt even better than I thought it would) and hurled myself over the top bleeding like no wounded doe has in all the world and gasping like no hessian sack of half drowned kittens, sweet as. 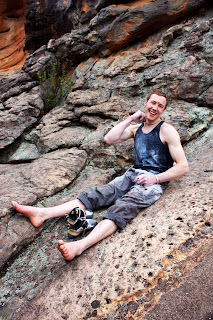 success and blood between my eyes.

The next day was gooden. With a bunch of pals from NZ we swung by the kindergarten where we did some ace problems I've always been meaning to do but have never, until now, gotten around to doing. Things like Nevin Rule v7, Spanking The Monkey v8, Gripmaster v10 and So You Think You Can Dance v11. After that me and Jim Morrison went over to where the blazing sun never dips, The (Project) Wall. It must have been about 5000 degrees or close to it but we both had some great progress on Mana, the classic of the crag and then headed on up to HMC again, giving Sticky Dales magnum opus Stuck South Of The Border (v12) a wee tickle. After a bit of irreversible skin loss we handed the sun over to the horizon and walked down in the dark. That was Mr. Mojo's last day, so the next morning he and fellow New Zealander and space boy of yore Matt Eaten left in a cloud of dust leaving me as I was always to be. 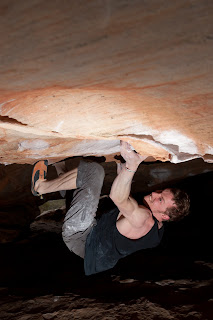 I too was to leave the next day so had to get a wriggle on for the day weren't gonna split my tips for me. Thought I might give Stuck South Of The Border another tickle like so I headed on back up there with my arsenal of pads. The problem is really ace, upon first viewing, before having pulled on I thought it looked crap but the more I looked at it the sequence started to unravel and it began to look better and better as time went by. Kind of like the fillies of Horsham do after one too many. Anyway, having sorted out the moves the day before things moved quick sticks and I managed to send it packing from whence it komme aus, which was good. Ooo, and as it links into the crux of Sleepy Hollow and thus The Wheel I tried to carry on to through to the top but alas, twas not to be and the gods of not letting me send things packing made me unstuck on Dead Can't Dance. Dang it.
What was cool though was another problem, Stimulation V12, that I thought looked crap as but turned out to climb really well. So yeah, did it too, which was ace, it has an ace sloper on it, and then went on down to Andersens to goof off with my new sling shot/"burly thrower" (that was the condition of purchase- that I don't call it a sling shot) and did some classics while I was there. 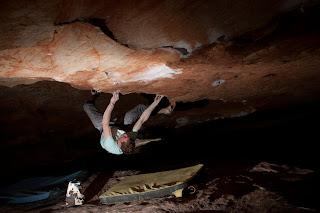 (photo: James Morris).
Well, that took longer than it needed too. I left the next day with a smokey car and some ace problems in my pocket of ace problems where I keep the ace problems, the ones that I've done...

The drive home was uneventful, angst ridden and long for my mind dreaded the fact that I was driving a car whose days are numbered...