What follows is wholly exempt from the prying, preying, opportunistic eyes of the grammatically fearful. Please refrain from telling me that I spelt '3' incorrectly or some such things that don't ma'er none.

Well more and more keeps on happening in the world of Blue Mountains bouldering even though I only just wrote a blog about it the other day. Here's an even more up-to-date update on a few random days in this random blood soaked floating stone of oblivion.

Firstly a new boulder crag has been discovered just off the end of the road in Hungerton, which is the faroutest town down in the depths of the loathsome Megalong Valley, the crown'a which you'll nodoubtedly be familiar with, that being the Ukelore Valley. If the Ukelore be the randy cheer leader equivalent of a bouldering area then Hungerton, or as we like to call it Cross-Eyed County, is the chain dragging strolling bones of the long forgotten corpse of a loveless nag. Not to in anyway describe it as anything other than amazing, which it is, it's just it's such a far flung distance from the maternal heartland of Blackheath that the walk of 15km on rough and often treacherous tracks seems like such a task when compared to the walk to the Ukelore which is such an easy skip down the Govetts Leaps steps. When presented with the option...which is easier with 3 pads and a soul as heavy as the three masts of The Beagle and all the sunken cannonballs of upended sand time, yes sir, you get my picture. The bouldering there though is beyond reproach once reached. 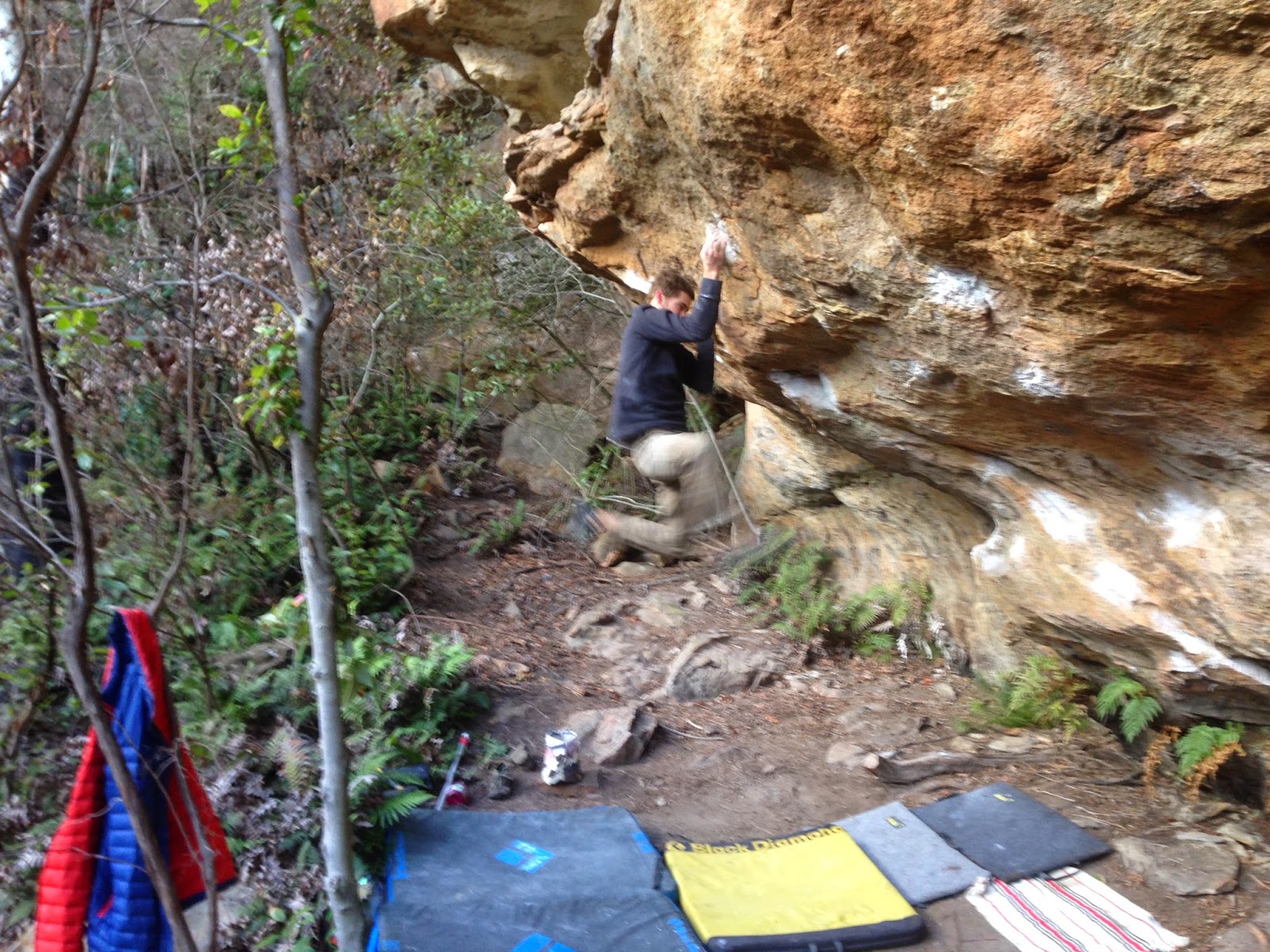 The purest of sandstone kinked over at more jagged angles than any strewn mountain moraine, the stone as dense as any moonshine blinded, buck-tooth Appalachian cousin-brother that you ain't met yet. That is to say, real dense and awful good. So far there are only a handful of boulders up but Tom, Dave, Rose, Lee and I have probably spent a good few days out there fooling around on some of the choicest cuts. Most of the attention has been focused on the cave known to the locals as Buggery Cave which is just off the road at the end of the cup-du-sac just next to the tin shed, where if you squint on the night of a waning moon you see the shaved face of Jesus on the derelict grain silo in surround sound, crouching with head in hands and engulfed in a swarm of autoluminescent crows radiating blackness. 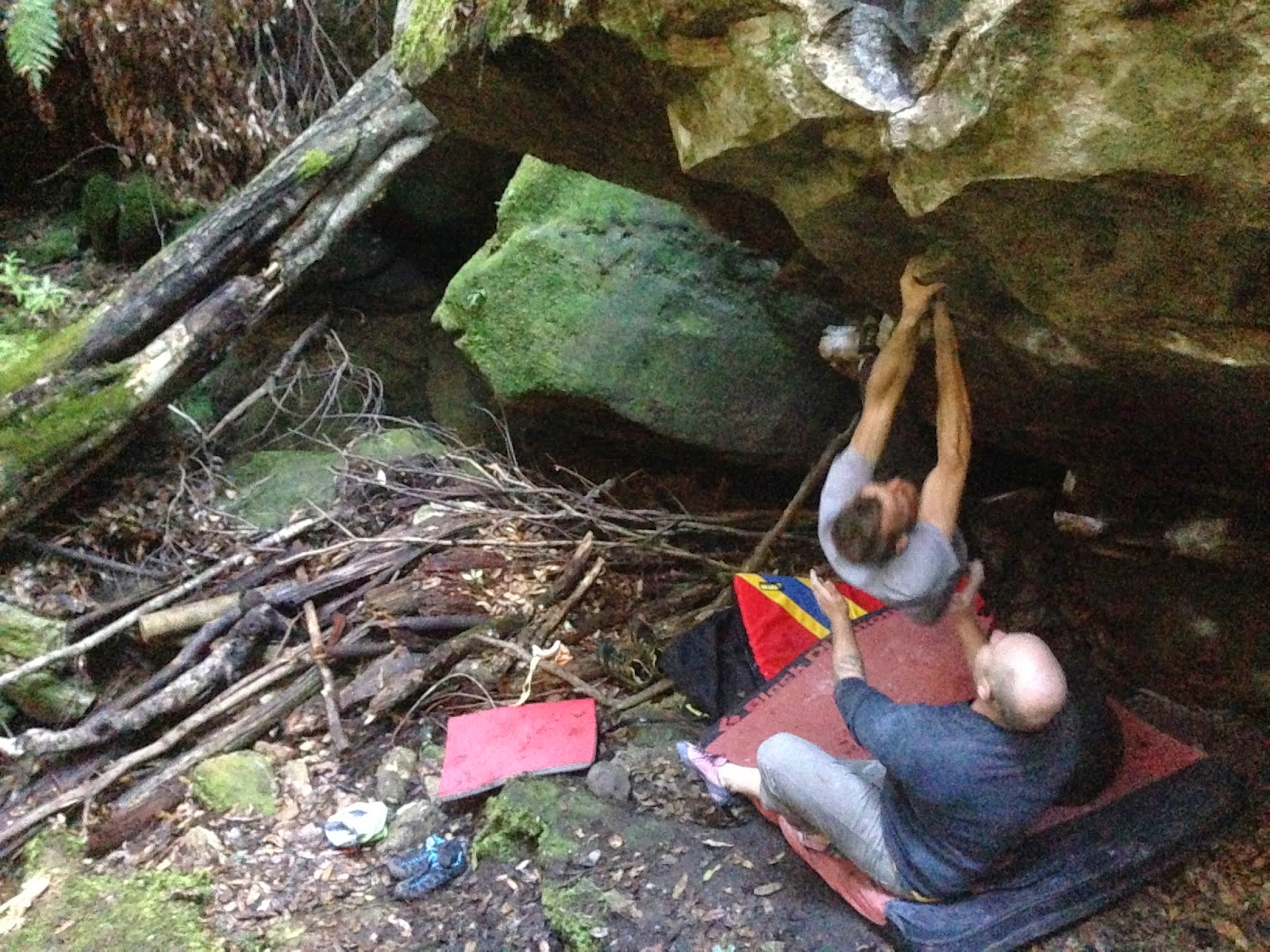 This place features killer lines out some ace roofs. The first problem to be sent was a high ball arete on immaculate rock above a big drop, it's called Backwards Buggerer and is around V4. The crux is reaching for a large proboscis at the limit of your reach and just before you over balance and go off the wrong side of the arete, skywards and downwards. It's great.

The other one's called Even Short Men Sing The Blues. 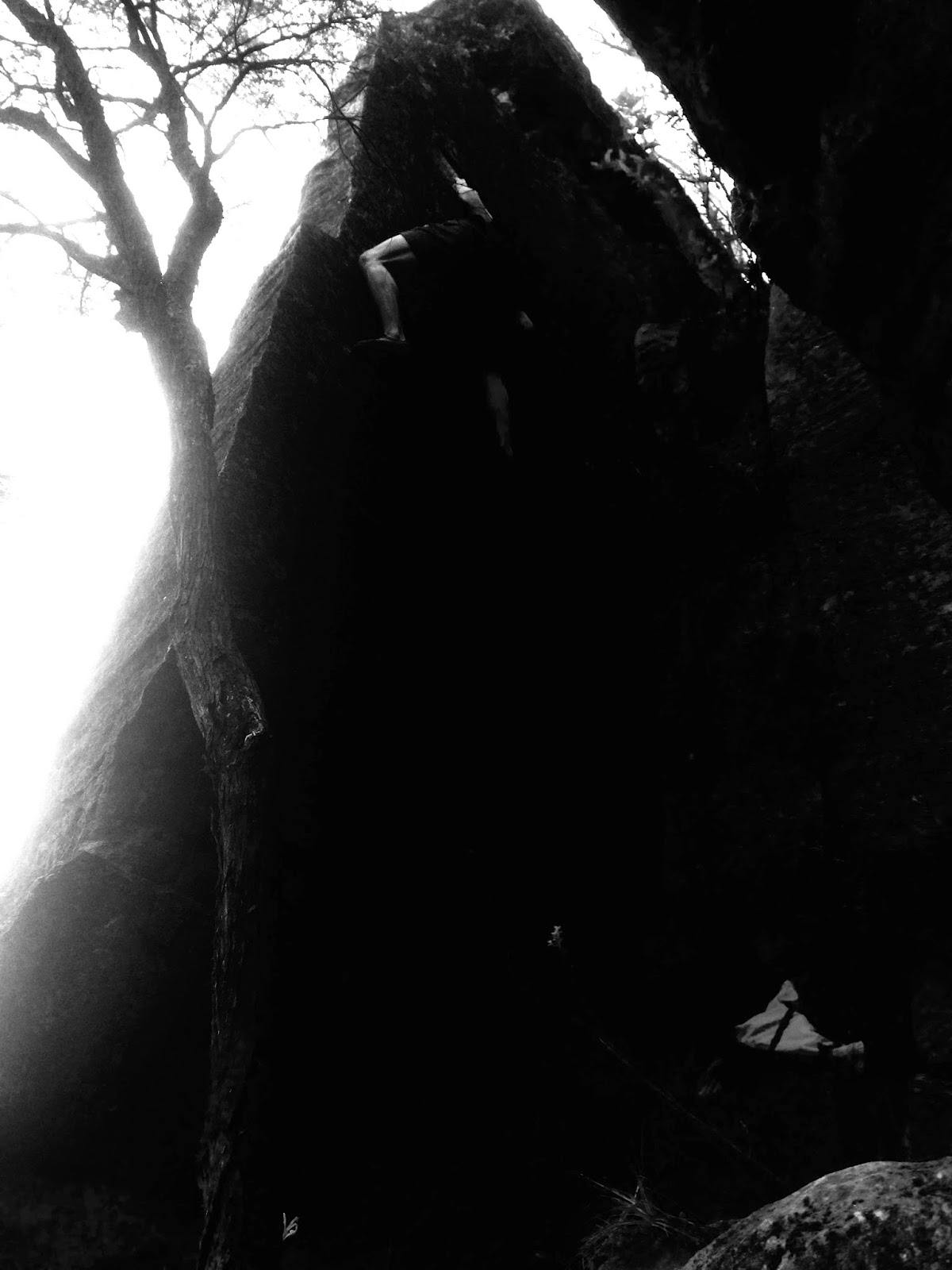 The name comes from a local, kinda like a semi pigmy, whom we met a few times down in Buggery Cave who was always lamenting lost loves and relating tales of injustice from yester year whenever we saw him. One particular tale went thusly... he was sitting at Blackheath station awaiting the next train down the Megalong and was picked up by the station master for assaulting the stations dog Fredo who'd been sleeping on his bed just next to where the break-men clean the railscum from their boots. He snipped a third (the middle third I'm told) of the poor things tale off with a pair of tin snips he'd just gotten from the Mitre 10 and hurled the severed portion at an old blind lady in full view of the other awaiting passengers, who were suitably repulsed. At this point of the story we were all a bit put off and half rejoicing the fact that this new mega area wasn't closer to Blackheath. He continued on for about 45 minutes about how he'd never met with such injustice in the world and that that kind of thing was "not far from normal" down on the farm, from which'n he'd hailed, where he'd "grewed up with his cousins and brothers and sisters" (presumably the same people) and just didn't get the big bad city wayzz. He'd apparently been arrested several times for all manner of other things including the caves namesake as he proudly announced "all 'cross the country, this here's where I practise my trade, sharpen my blade if you get me", we did. He even offered to "lick better" a flapper I had on one of my fingers. I couldn't see how licking it would make it any better and informed him heartedly of my scepticism but let him try it out anyway. After about 20 minutes it had actually closed up a little, stopped bleeding and felt a whole lot better, and I managed to send the problem that I had only just conceded defeat on. That night though it developed a faint glow of black and started attracting winged insects as though it was one of those blue light mosquito traps that you never see anymore. Upon landing on my finger the poor, hopeless and damned insects dustways fell and downwards only to land in unrecognisable puffs of ashy blackness, they now too with a faint glow of extradark. 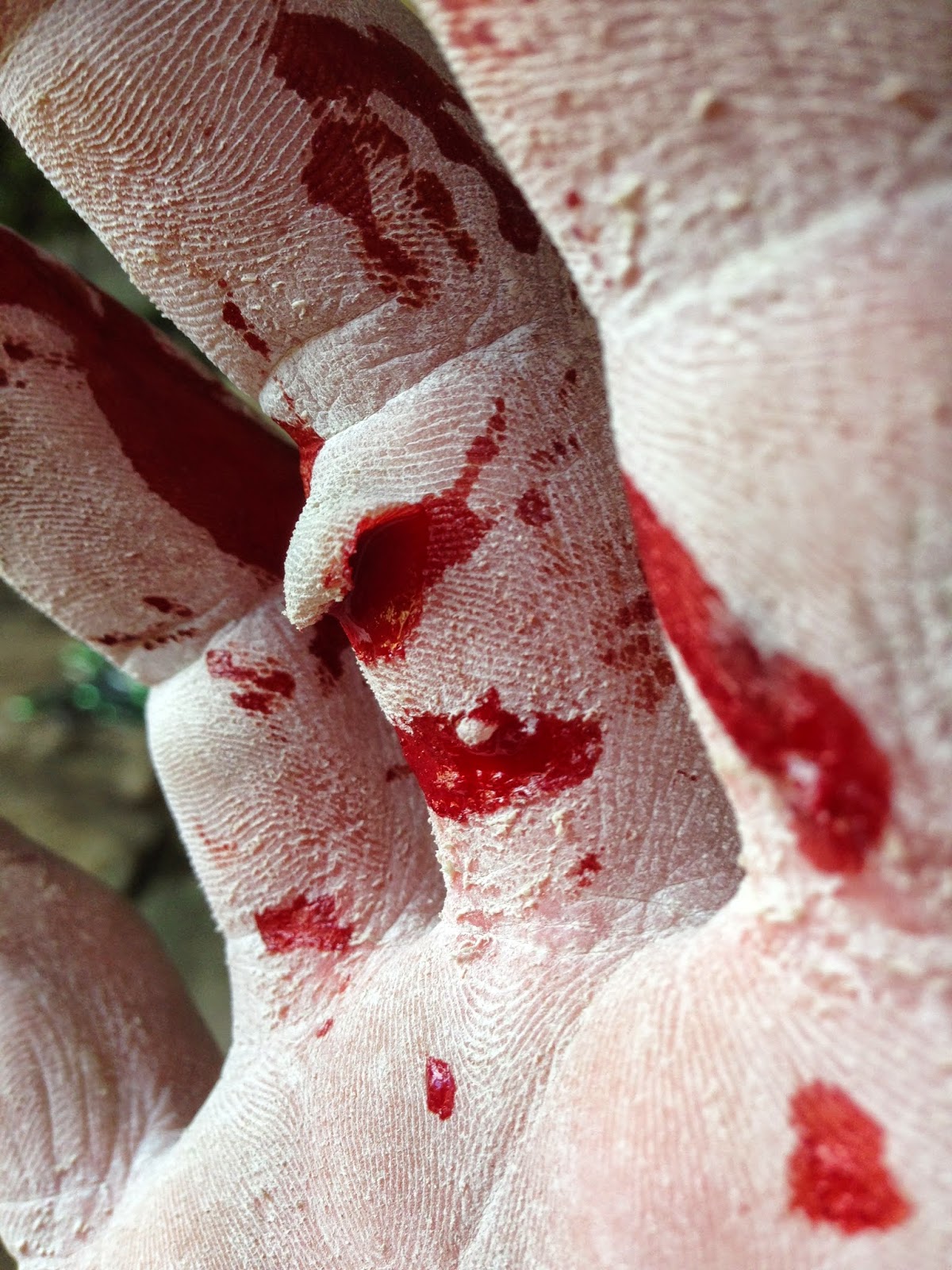 There's also an awesome full-power project going straight out the guts of the roof to the left of ESMSTB on positive enough edges in a full frontal systems pattern. It's so front on and powerful and the last hard move is a campus from beneath the roof, over the lip off a quarter pad edge. I think there's one move we've not at this point quite yet not managed to do quite yet so far yet at this point but should get it sorted once the weather cools down a smidge. It's like the move to nine on a 1-5-9 campus but in a front-lever position, quite cool. 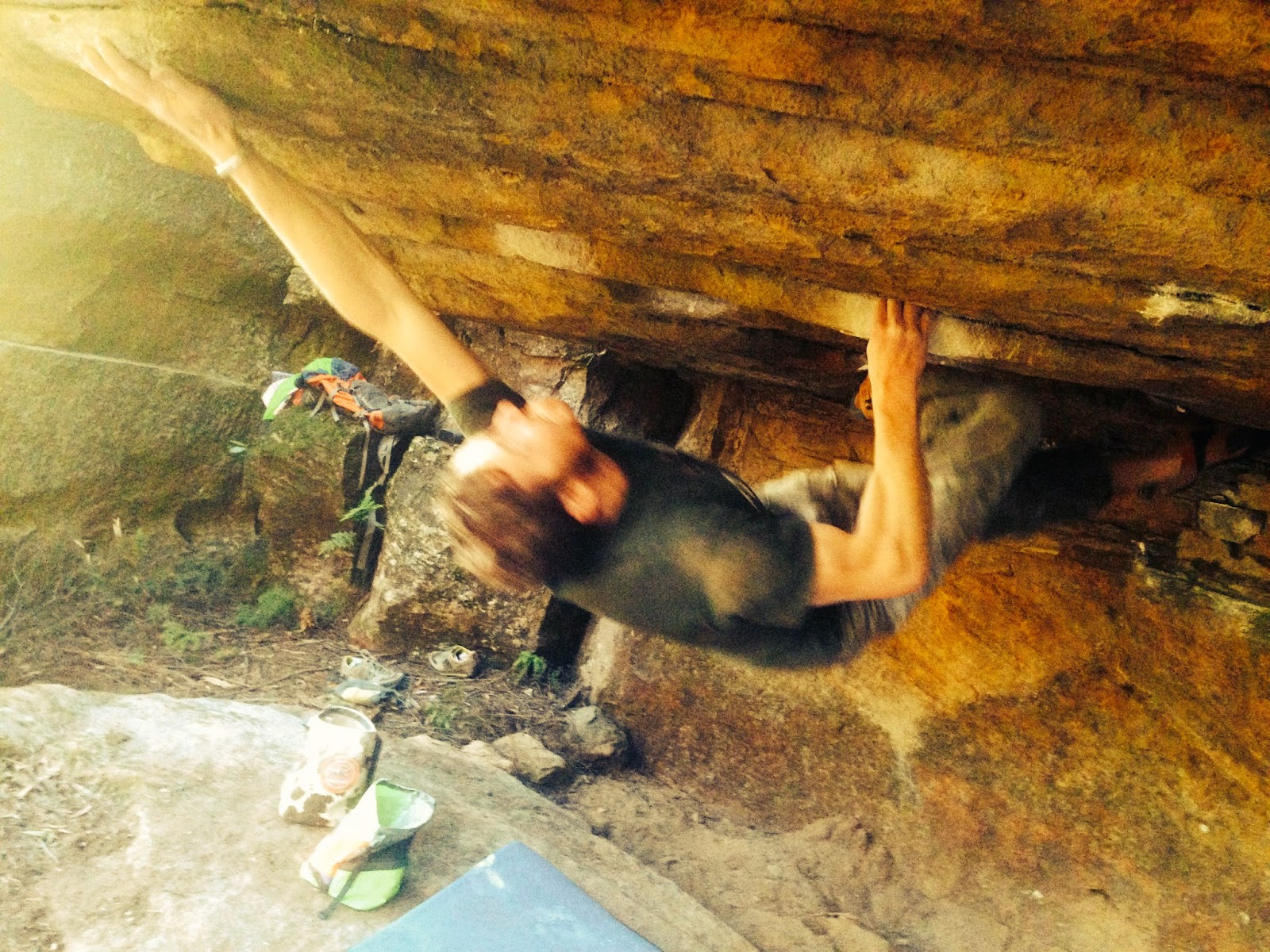 Some info will be thrown up on The Crag when we gets chance :)